Armenia and its Diaspora has obtained and created its cuisine within its history. Sometimes being influenced by the Middle East, sometimes by Greece and Iran, this cuisine has also got influenced by neighboring countries: Syria and Lebanon. We find many common dishes in Lebanese, Greek, Turkish or Armenian cuisines.

Among the most popular traditional dishes is khash, a sort of stew of boiled cow feet, which is mostly popular in winter; khashlama soup of potatoes and beef, harissa a kind of fondue made of crushed wheat and chicken, "ghapama" pumpkin stuffed with boiled rice, nuts, fruits and raisins, dolma with meat and rice stuffed in vine leaves or vegetables.

With any meal Armenians like to drink "tun" (a dough equivalent to Iranian and Turkish ayran). The cuisine of Western Armenia (practiced in the Diaspora since the Armenian genocide) is closer to Turkish cuisine, Lebanese and Greek ones: basturma, soudjoukh, hummus, moutabal, beurek, dolma, etc.

Dishes are served with lavash, the traditional Armenian bread. As a dessert, we highlight the oriental pastries covered with honey, such as pakhlava, sari bourma or gata- a bakery with sweet butter, nuts and spices. 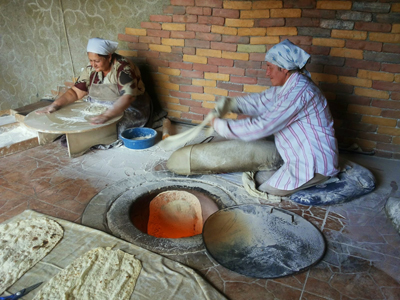