The Babylonian star-map on a clay plate is one of the oldest in the world (5th century BC). Armenia is one of the six countries designated on it. According to folk legends and the historian Movses of Khorene (Movses Khorenatsi) the Armenian archer is considered to be Noah’s son, Hayk.

Today the archaeological research can provide new explanations for the origin of the Armenian people.

In the IX-VI centuries BC the tribes of Nairi formed a powerful state with its capital Urartu, Tushpa (Van).

On the ruins of the Urartu Kingdom appeared the ancient kingdom of Armenia (625 BC), which encompassed large parts of Hayasa, Nairi and Urartu. This is the process of the formation of the Armenian People. From the very beginning of its existence, Armenia was forced to lead a constant struggle for independence against the Medean empire, Achaemenid Persia andthe Greek-Macedonian conquerors.

The brightest representative of the dynasty of Artashesian was Tigran the Great (95-55BC). He pushed forward the borders of Greater Armenia and created a big empire stretching from the Caspian to Minor Armenia and south to the Mediterranean. 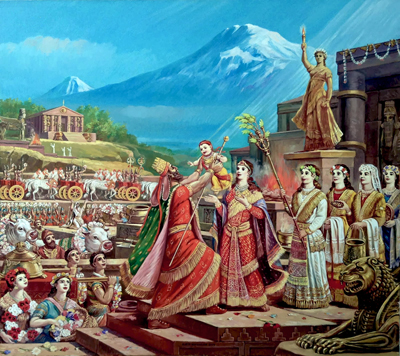 In 301, Armenia was the first country to adopt Christianity as a state religion. The church became a powerful feudal institution, which contributed to the strengthening of the state power. Finally in 387 the Romans and the Persians divided the country. In the seventh century Armenia was conquered by the Arabs. Their rule over the country lasted for 2 centuries.

In the late ninth century, Armenia regained its independence again: Dynasty of Bagratids (Bagratuni) came into the power. After two hundred years of independence, in the eleventh century, the Turk Seljuks came from the east and in the thirteenth century Mongol hordes came to Armenia. Only Kilikia, the Armenian state, which was founded in the XI century on the northeast shore of the Mediterranean, remained independent and escaped from the Mongol attacks. But Kilikia itself fell in an unequal struggle against Mameluke Egypt in 1375. Afterwards only small Armenian principalities continued their existence.

In 1915-1916 the Ottoman government of the Young Turks began the realization of the Armenian genocide and as a result, 1.5 million Armenians were killed.

On May 28, 1918 Armenia became independent again, though it didn’t last long. In 1922 Armenia fell under the control of the Bolsheviks and was incorporated into USSR. Armenia gained its independence again in 1991 after the collapse of the Soviet Union.